The Performing Arts Center has cancelled all live performances until further notice. There will be a few special events scheduled, however. Please check our Special Events page for details as they become available. The Box Office will also be closed until further notice. You can leave messages at (808) 932-7490 or email the box office at artsctr@hawaii.edu. 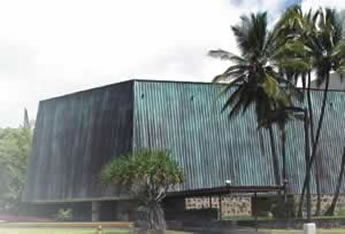 The University of Hawaiʻi at Hilo Performing Arts Center is the major performing arts educational and cultural center on the Big Island, serving as a joint special use facility for the University and Big Island Communities. The Performing Arts Center is primarily an instructional facility providing for the regular educational functions of the University of Hawaii at Hilo, whose purpose is to offer significant educational and diverse cultural opportunities -- where dialogue, the exchange of cultural and artistic ideas and co-curricular activities are encouraged.

The Performing Arts Center produces, presents and/or co-sponsors an extensive and culturally diverse year-round Season of local, regional, national, and international performing arts events performed by some of the world's greatest artists. The quality of events presented in the 600-seat Theatre is equal to any offered by major mainland universities. A typical year includes over 150 performances of dance, drama, music, mime, children's shows, lectures and special events.